Sign up for my mailing list and be the first to receive news about No One Ever Drowned In Sweat.
Thank you! Your submission has been received!
Oops! Something went wrong while submitting the form 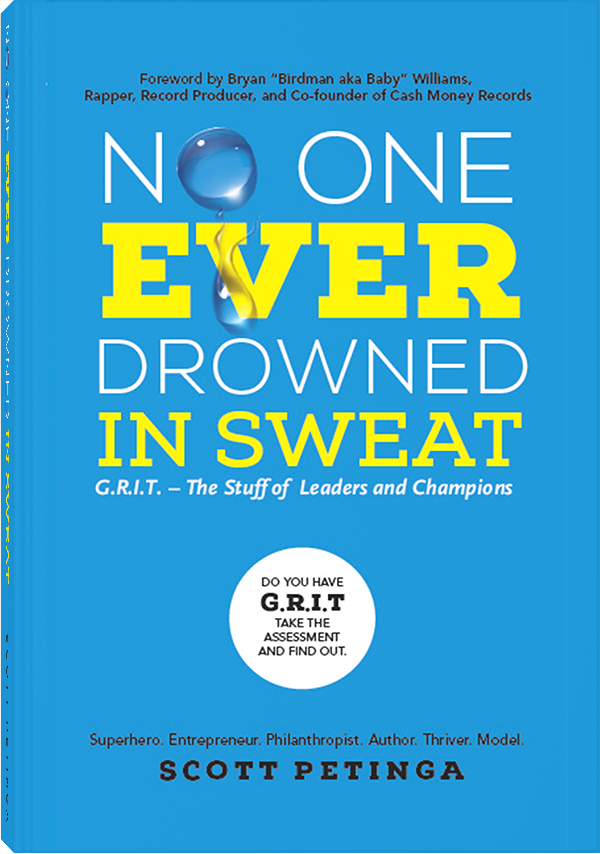 Pinterest
Tired of failing or living a mediocre life? This book will reveal the tools to turn your life around for the better. Sure, it’s hard work, but as Scott says…

No one ever drowned in sweat!

Life is full of resistance seeking to sink your dreams.

It takes hard work plus a daily dose of G.R.I.T. to overcome this resistance and reach your goals. G.R.I.T. stands for Guts, Resilience, Initiative and Tenacity which Scott Petinga, Chief Troublemaker at The Scott Petinga Group, says are the foundational ingredients necessary to get the journey started, keep momentum going, effectively handle hurdles along the way, and stick with the task until the destination is reached.

Scott knows about adversity… and failure.

He flunked out of school, was kicked out of the Marines, has been fired from jobs, went through a divorce and is suffering through one of the greatest tests of all… being diagnosed with cancer. In spite of the harsh setbacks, Scott has used G.R.I.T. to get back up after being knocked down and forge ahead towards the fulfillment of his dreams.

In No One Ever Drowned in Sweat, Scott breaks down each trait of G.R.I.T.

and how to successfully use them to reach your goals. Besides sharing his own experiences, Scott adds words of wisdom from interviews of over 50 notable CEOs, entrepreneurs, nonprofit heads, thought leaders athletes, everyday heroes, academics and forward thinkers from all walks of life.

You’ll learn how these traits are the driving force...

that makes things happen, even if you don’t have a formal education. As a matter of fact, Scott explains how it is the elements of G.R.I.T. that are needed to restore the business world which has grown basically weak and unproductive because corporate heads have valued those with educational parchments and alphabetical titles over those with the characteristics of G.R.I.T.

This Book Is For

If you desire to start your own business, or have already taken the initial step to that end, this book will help you overcome obstacles and press towards success.

If you are attempting to climb the ladder within a company, but find yourself hindered or stuck, this book will assist you with reaching those seemingly out-of-reach rungs.

If your competitive nature has you seeking to make your mark on the sports world or other venue pitting you against tough competition, you will find that this book will sharpen your game.

Even if you consider yourself to be an Average Joe or Plain Jane, this book can help you shake off the shackles of mediocrity and blossom, not only at your job, but in your family life, social circles and practically any other area you desire to change.

Scott Petinga has risen through such oppositions as failure, rejection, divorce and even cancer to accomplish impressive and respectable goals and now has this insatiable drive, this compulsion to create change. To be change. Everything he pursues must have meaning and purpose beyond the norm.

Petinga is currently the Chief Troublemaker of The Scott Petinga Group where he is a pioneer in the development of businesses that make a lasting impact on society. When he’s not busy saving the planet he uses his acquired wisdom, knowledge and experience to help others make their mark in the world.

After serving in the military and in roles as varied as Vice President of Segmentation Management at Santander Bank and Adjunct Professor at several regional colleges, Petinga put his brilliant marketing skills to work. He served in several senior executive roles at advertising agencies, including Accountability Director at Carmichael Lynch and Strategic Planning Director at RMG Connect – JWT, before leaving Madison Avenue in 2007 to launch his flagship company, the data-driven communications agency AKQURACY. Founded on the strength of a single client relationship, Petinga has since grown the company into a multi-million-dollar marketing endeavor.

Within 5 years, AKQURACY earned a spot on Inc. Magazine’s prestigious List of Fastest-Growing Private Companies and then Petinga went on to be selected to join the Young Entrepreneur Council (YEC) – an invite only organization comprised of the world's most successful young entrepreneurs – plus was a semi-finalist for Entrepreneur magazine’s “Entrepreneur of the Year” Award.

Petinga is also extremely passionate about serving the community: he is the founder of the TH!NK DIFFERENT Foundation, the Fairy Foundation, the Center of Advocacy for Cancer of the Testes International (CACTI), and a volunteer mentor with Imerman Angels of Chicago.


The book is just the first step toward releasing exponential growth and success in your life!

Once you understand the principles of G.R.I.T., take the next important step of the journey by purchasing The Assessment which is designed to give you valuable insight into your personal life qualities as well as continued learning tools and data.

Ability to become whoever you want.

The beginning of something greater.

The Book + The Assessment

A Hard 1-2 Punch Against Resistance To Your Success!

$4.95 for ebook
Learn how to successfully use the traits of the G.R.I.T. mindset to turn your life around and accomplish your goals.
get the book

Take the assessment below to access your FREE Action Mindset Profile (AMP)! Learn more about the interpersonal tools that you leverage when faced with a challenge, how they contribute to your success, and how you can tap into your strengths in an even more powerful way.
get the Assessment

For Events or General Questions


Twitter

Facebook

Instagram

Linkedin
The use of this site is subject to our terms of use & privacy policy. No part of this website may be reproduced in any form or by any means without permission in writing from the owner.
Copyright © 2016 by Scott Petinga. All rights reserved.
Crafted with  by Davida Pitts (Orange Moon Creative) with Webflow
 We DONATE 100% of our profits to create lasting memories for adults with life-threatening medical conditions.
close
